Who’s in Charge of Space: Can we “Marie Kondo” Space in order to Save the Future of Space Travel?

Marie Kondo and Elon Musk might be one of the most unexpected duos of the decade, up there in the ranks of Tom Brady and Rob Gronkowksi or Batman and Robin. Why? Because without artfully combining the principles of Kondo’s devotion to tidiness with Musk’s desire of exploration beyond the earth’s atmosphere we are looking at a much smaller and confined world, one with limitations, and potentially, without Facebook or Instagram…

When thinking of detritus as it relates to the health and safety of our planet and well-being; crowded landfills, throw-away culture and broad overconsumption comes to mind. Unfortunately, one huge component of our planet is often overlooked when it comes to trash management; space. We are dangerously reaching our debris capacity and as we slowly fill the vast space above us, we are approaching the precipice of imprisoning ourselves in a world limited by our own doing.

Over the past century space research done by all nations has contributed to a huge collection of debris2. Scientific experts expect this amount to triple in the next 15 years if this issue isn’t tackled soon3. Without an orchestrated effort, the Kessler Syndrome becomes more and more of a reality. The Kessler syndrome as defined by Professor Don Kessler of NASA, predicts that impacts between space particles will become more and more common and create more un-trackable fragments of debris. As time goes by, large objects will smash into other large objects, causing a chain reaction3. Each crash will lead to an abundance of smaller particles, exponentially increasing the number of particles in space and the probability of collisions. The cloud created by these particles will consume the space surrounding earth, making it an impenetrable shield limiting space travel, exploration, the existence of satellites, GPS satellites and the possibility of networks, and therefore the internet4. In essence, we will be locking ourselves into a world that we cannot escape due to an invisible junk yard. Our world will be swarmed with a locust plague of space junk. The environmental and health implications can’t even begin to be predicted.

Let’s start from the beginning, when a space shuttle plunges past the earth’s atmosphere into space you might think it is taking a “road not taken” clean from common traffic on earth. Although in one sense this may be true, space shuttles are not waiting at a lengthy red light, they do, however, have to dodge and maneuver a crowded space filled with hundreds of thousands of microparticles of debris. Not exactly how you pictured space, huh? The next question you might have is how these tiny participles could possibly interfere with a fortified, built-to-last space shuttle? The answer is way more complicated than it might seem at first glance.

Things like commercial or non-commercial satellite parts, or even specs of dust, stay in orbit around the earth because they are traveling at intensely high speeds, somewhere around 17,000 mph (27,000 km/h)3. This wouldn’t be problematic if all parts and particles were traveling in the same direction and orbit, however, due to the complex and dynamic nature of Earth there are many orbits, all positioned at different angles, which creates many opportunities for particles to collide at blistering speeds4. These collisions have huge impact speeds, and therefore release massive amounts of energy and create even smaller particles. To illustrate this, a ½ inch (1 cm) spec of paint traveling at 22,000 mph (35,000 km/h) has the same kinetic impact energy of an object weighing 550lbs (250kg) at 60 mph (96 km/h). To further my point, a 4-inch object (10 cm) has the same impact energy of 7kg of TNT4! 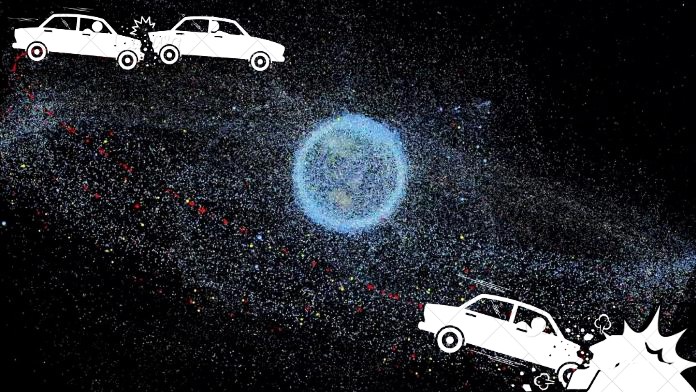 In order to avoid these catastrophic collisions, the Space Surveillance Network is currently tracking roughly 750,000 pieces of “junk” in what they call a space catalog5. This number is incomplete, as there is estimated to be thousands of more particles that are too small to be able to track, further complicating space missions. This catalog is essentially a log of all the manmade pieces of debris surrounding earth in space. Of the orbiting particles, 16,000 of them are 10 cm or larger, but the majority of items are sized between 1-10 cm5. The Space Surveillance Network makes sure that whenever there is a launch, they track all possible collisions and particles to make sure there are no unwanted crashes during launch and its orbit. If a satellite or space shuttle does come near space debris, an alert is sent out and surprisingly, this network sends out several thousand of them every day5. Within those couple thousand, there is a more refined alert system that designates an alert as an emergency or not. Those alerts come in at around 6-10 a day5.

These alerts are only valuable if we are able to track every particle in space, but due to the presence of microparticles this is impossible and unfortunately, collisions have already occurred. Since space exploration began in the 1950s, there have been several thousand vehicle flights which have resulted in clouds of aluminum dust, nuclear power satellites that have created droplets of coolant liquid and radio experiments that have left strands of cooper wire aplenty4. This is not inclusive of many a defunct satellite, empty rocket stages, discarded shields and even lens caps. Many of the impossible to track microparticles have been caused by flecks of paint that have been degraded over time from extreme UV radiation4. In 2016, a piece of micro debris cut a hole in the solar panel of Copernicus Sentinel 1A satellite causing a slight disruption in its performance. Luckily, no damage was sustained long term but if this collision occurred in a slightly different spot or was due to a larger object, it could have had broad implications with Land and Ocean monitoring- affecting millions5.

Although there have been very few large-scale collisions to date, we should look to the past as examples of what could happen in the future in order to make more responsible decisions. In 2007, China tested an anti-satellite weapon by destroying a defunct probe with a rocket4. This explosion created the largest break up of debris in space history, adding roughly 3,000 new trackable pieces of space junk into our atmosphere. In 2009, a dead Russian probe struck and destroyed an operating US commercial satellite blasting 2,000 more tiny bits of space particles into orbit5.

Other than the Space Surveillance Network, what person or group of people fall within the realm of responsibility to react and protect our space from future debris? If we don’t change the way we operate in space, years from now we might not be able have expeditions to the moon, and Elon Musk’s plans of residing on Mars could be halted. The ramifications spread to every facet of life, there would be no way to perform satellite communications: networks, weather satellites, research probes, GPS systems, weather balloons, live international news, stock price updates, flight information, and social media could disappear4. We could imprison ourselves on earth while making it smaller and more difficult to understand while we do it. When space exploration began, there was no way of dealing with vehicles or the machines once they were no longer useful so they were left floating around the earth. But as this pattern continued, more debris has built up. We now have the duty to act.

Currently, government space agencies and corporate operators are working together in the inter-agency space debris coordination committee in order to develop guidelines about how to limit space junk. They have come to the sad conclusion that space debris cannot be eliminated successfully so every attempt to prevent further collisions and an increase in microparticles must exhausted. Like many man-made issues we have seen before, we have learned that nature has a beautiful way of handling certain degrees of influx but as humans we tend to push these limits beyond the earth’s capacity to “self-regulate”.

The earth has a “self-cleaning” function. Every 11 years, the solar cycle increases the amount of energy received by the earth from the Sun5. This increase heats up the lower parts of the atmosphere which expands outwards creating higher air drag, which in turn, causes debris in the lower orbits to slow down and fall back to earth to burn up4. In normal conditions, this cleaning measure would be enough to eliminate random objects in orbit, but the human problem is that we are filling up space faster than the earth can naturally clean up our trash.

Unfortunately, this problem is all too familiar. Without the proper policies and long-term thinking, we could be setting ourselves up for failure. For Elon Musk’s sake, I hope more and more people find items in their homes, their lives, their planets, and hearts that spark joy.