Human activity has had a growing influence on environment since the Industrial Revolution. As a result, climate change has become one of humanity’s greatest concerns. From the massive burning of fossil fuels to global warming, to retreating glaciers and rising sea levels, climate change is influencing the earth in numerous ways. There are a great variety of indirect consequences that are much more far-reaching than we can see or conceive. Flooding is one of these unintended consequences.

What is climate change?

Any change in climate over time, whether caused by natural variability or as a result of human action, is referred to as climate change. Among the natural factors are changes in the solar cycle; while human actions, such as the burning of fossil fuels like coal, oil, and natural gas, which emit greenhouse gases, have been the most major drivers of climate change since the 19th century. Under natural conditions, part of the energy that the sun strikes the planet during the day is absorbed or reflected back into the universe by the atmosphere, and the rest, around 47%, is absorbed by the earth’s surface; at night, this energy is expelled into the cosmos from the earth’s surface. Like a glass-covered greenhouse, the atmosphere conserves a certain amount of heat, allowing the earth to maintain a pleasant temperature. In this way, nature maintains a temperature balance on the earth’s surface without (as in the case with the Moon) a sharp rise in temperature when it is illuminated by the sun and a severe decrease when it does not see daylight. However, large quantities of greenhouse gases, such as carbon dioxide and methane, are progressively upsetting this balance, lowering the amount of heat the Earth emits into the cosmos to the point that global temperatures are steadily rising. The last decade (2011-2020) has been the warmest on record, with temperatures now 1.1 degrees higher than they were at the end of the 19th century. Global warming, acid rain, and ozone depletion are the three primary symptoms of climate change, with global warming being the most significant concern for mankind.

Floods are one of the world’s most dangerous natural catastrophes, and they usually strike highly populated regions with high levels of agricultural development, concentrations of rivers and lakes, and ample rainfall, such as the Northern Hemisphere’s mild temperate and subtropical zones. Floods are classified into five groups according to where they occur (Denchak, 2019). First, there is the areal, which occurs in flat or low-lying areas when the inflow of rainwater exceeds the outflow or infiltration. Then, fluvial flooding, which happens in rivers and is produced by precipitation or snowmelt that causes river levels to increase. This type includes flash floods and mudslides. There are also estuarine and coastal floods; large waves are created by upstream rivers carrying excessive flows and storm surges on the coastline causes coastal flooding. And there are urban floods, which occur in densely populated areas when the drainage system’s capacity is exceeded. Finally, catastrophic floods can occur as a result of extreme natural disasters like earthquakes or tsunamis. River flooding is the most common and intriguing sort of flooding to scholars all around the world. Methods and techniques for flood control can only be discovered and identified after the causes of floods are properly recognized.

The impact of climate change on floods

The IPCC’s Special Report (2012) on Managing the Risk of Severe Occurrences, is the first thorough evaluation of climate change’s influence on extreme hazard events like floods. Among these, precipitation and temperature are the most important climate-characteristic variables affecting flood hazard systems. While global warming may not directly cause floods, it does aggravate many of the variables that do.

Climate change has the potential to have both direct and indirect effects on floods (e.g. Figure 1) (Fang et al, 2014), in terms of precipitation and temperature (Dou et al, 2019). On the one hand, there are changes in precipitation as a direct impact of climate change. The tropics and mid- and high-latitudes exhibit a general tendency toward higher precipitation, whereas the subtropics show a general trend toward reduced precipitation. Furthermore, the structure of precipitation is shifting, with fewer light rain days on the rise, more heavy rain days on the rise, and droughts and floods strengthening, making dry regions drier and wet places wetter (Blöschl et al, 2019). This worldwide change in rainfall patterns will have a negative impact on severe rainfall variability within a specific location. Equally as influential, the evaporation from rivers and seas increases as a result of global warming (Konapala et al, 2020), resulting in a rising trend in the water vapor concentration of the atmosphere. As a result, the Earth’s water cycle becomes more intense, leading to changes in the frequency and severity of severe regional rainfall. In terms of long-term indirect effects, temperature and precipitation influence the plant cover of the Earth’s surface, as well as the physical qualities and structure of the soil. Predictably, erosion and desertification will inevitably rise in some regions, and this will have a negative impact on surface runoff, increasing the chance of excessive runoff. The peak amount of water in rivers will then surpass the carrying capacity of river banks and embankments, resulting in frequent floods. 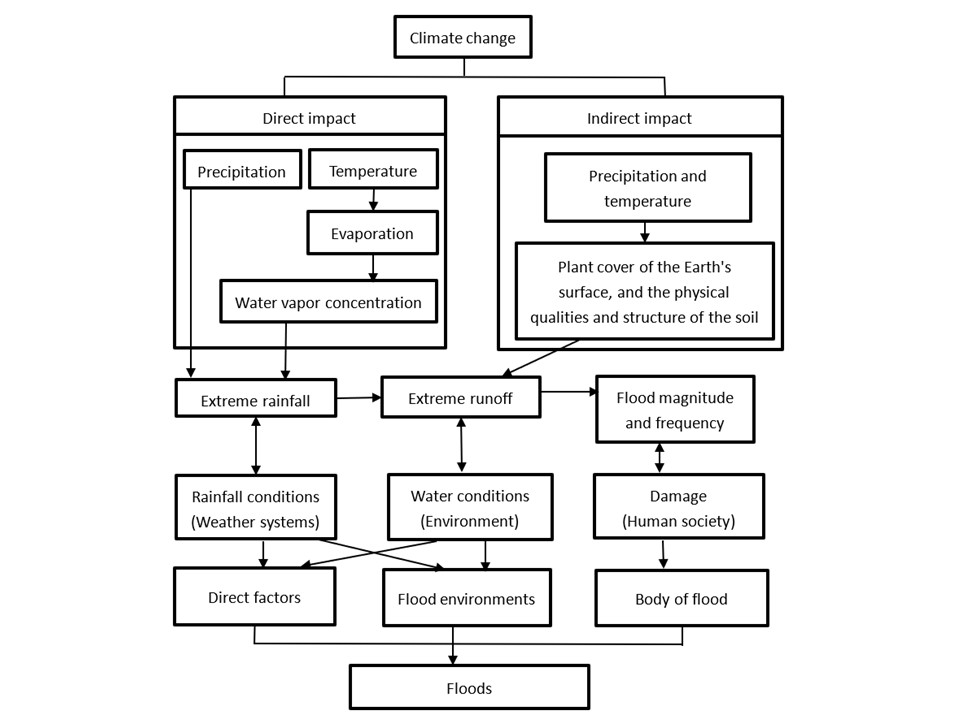 Flooding is caused by the interaction of the natural environment and human civilization, with three basic components: direct factors, the environment in which it occurs, and the body of floods ( e.g., Figure 1). Here, extreme rainstorms and runoff are direct contributors to floods, while the weather and climate systems that impact rainfall, as well as the terrain, vegetation, and soils that shape runoff, create the environment in which floods occur. Due to climate change, anomalies in weather, as well as changes in the earth’s water cycle, have resulted in varied degrees of change in environmental stability and direct flooding risk factors in particular places, leading to considerable variations in the likelihood and frequency of floods. On the other hand, in terms of flood formation processes, the weather system primarily influences changes in extreme rainfall (rainfall conditions); the land surface environmental system determines the runoff and confluence processes and influences changes in the formation of extreme runoff (water conditions); the extremes of nature have an impact on human culture, and the outcome is a flood.

Overall, with climate change, weather extremes are becoming more unpredictable and floods are happening more frequently, inflicting significant damage to individuals and society. Changes therefore need to be made to take care of the environment and to correct these climate problems so that the natural balance of the entire ecosystem can be restored and flood frequency and magnitude as well.

IPCC (2012), Managing the Risks of Extreme Events and Disasters to Advance Climate Change Adaptation. A Special Report of Working Groups I and II of the Intergovernmental Panel on Climate Change. Cambridge University Press, Cambridge, UK, and New York, USA, 582 pages