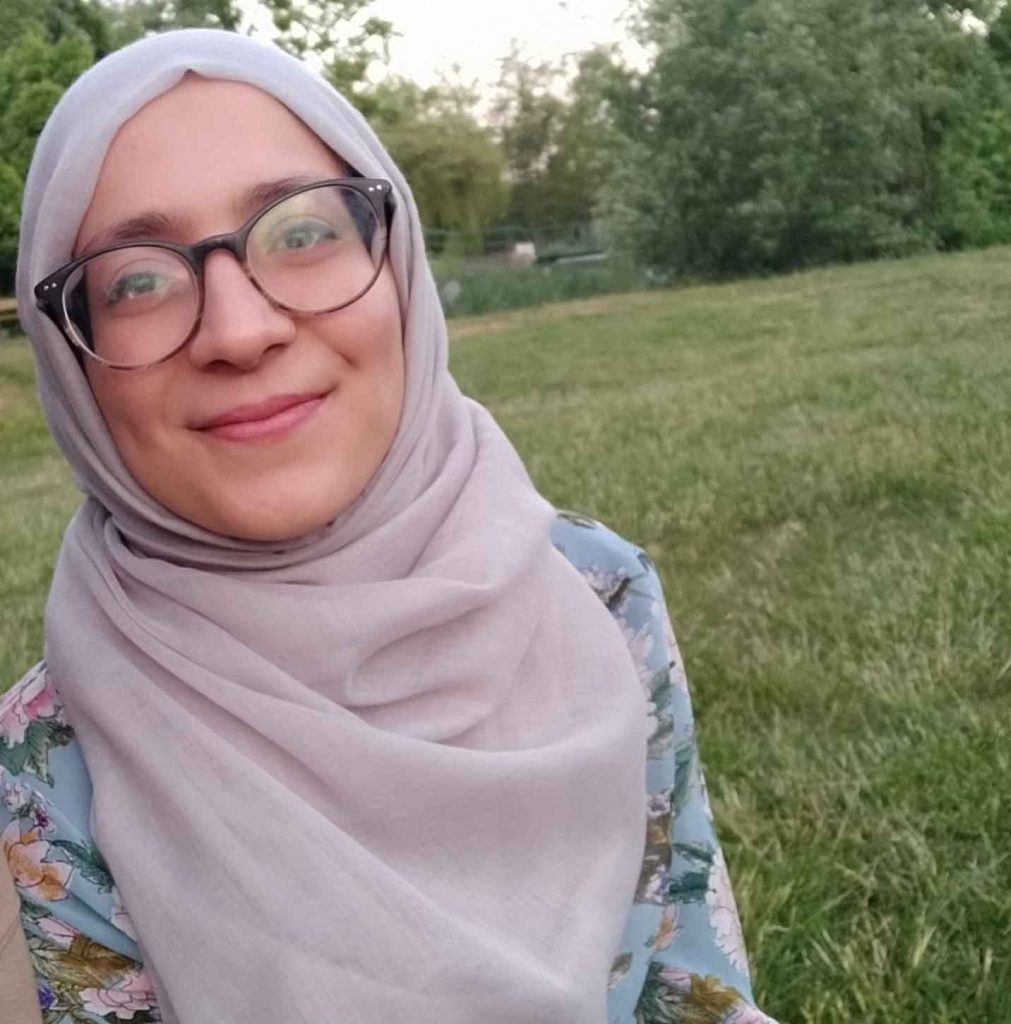 Change in society’s lifestyle, the development of Urbanization, excess consumption and waste of human, make our planet struggle and face every day drastic effects on certain ecologies and biospheres.

Nowadays, the increase of world population that is demanding more seafood and fish than ever creates a serious and a global concern which is the unsustainable fishing that results in overfishing. Overfishing is a relatively new phenomenon, that makes our oceans under pressure to meet the needs of growing populations in developing countries and a growing appetite for fish and seafood in developed nations.

Today, the rapid and modern development in fishing technology such as the massive factory ships, global positioning systems (GPS), and techniques that allow ships to deploy hooks and nets at tremendous depths make it easy to capture more fish and put the fish stock in decline. Actually, nearly 90% of the world fish population are fully exploited, overexploited or depleted (YPTE, 2020).

Fisheries is obviously a major part of the global economy. Over 15 % of the blue economy sector is represented by the fisheries sector which contributes to nearly 60 million jobs globally (FAO, 2018). Additionally, fish provide the primary, consistent source of protein consumed, for nearly 50% of the world’s population (FAO, 2018).

In recent years, the global consequences of overfishing have been the focus of scientists, economists, and policymakers. Overfishing is a contemporary issue that will continue and will cause fishless oceans by 2048 if humans keep fishing at the current pace (David Marinell, 2018).

Overfishing is not only affecting the simple status of fish populations and economic viability of fisheries but it also results in much broader impacts on global food security, social stability, cultural survival, and even national security (J.L. Blanchard et al., 2017).

Over the past 50 years, the production of fish and seafood has quadrupled worldwide due to the increase of world population thus to the food demand.

Actually, the consumption of seafood has doubled compared to the last century. This has increased pressure on fish stocks across the world.

Fish consumption increase considerably from 5.2 kg per capita in 1961 to 19.4 kg in 2017, at an average annual rate of 2.4 %. This rate has increased significantly in the last 20 years, reaching 2.9 percent per year, because of expanding fish production and imports. 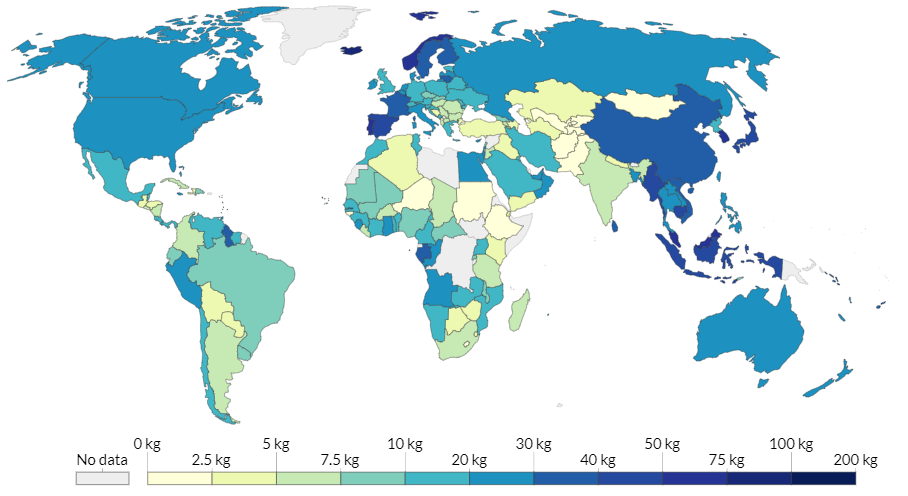 At the regional and continental levels, the lowest per capita fish consumption occurs in Africa, where it peaked at 10.5 kg in 2014 and then declined to 9.9 kg in 2017.

Projection of the consumption

Globally, in most of the regions the annual per capita food fish consumption is projected to decrease slightly. However, there are remarkable differences between regions as figure 2 below shows. 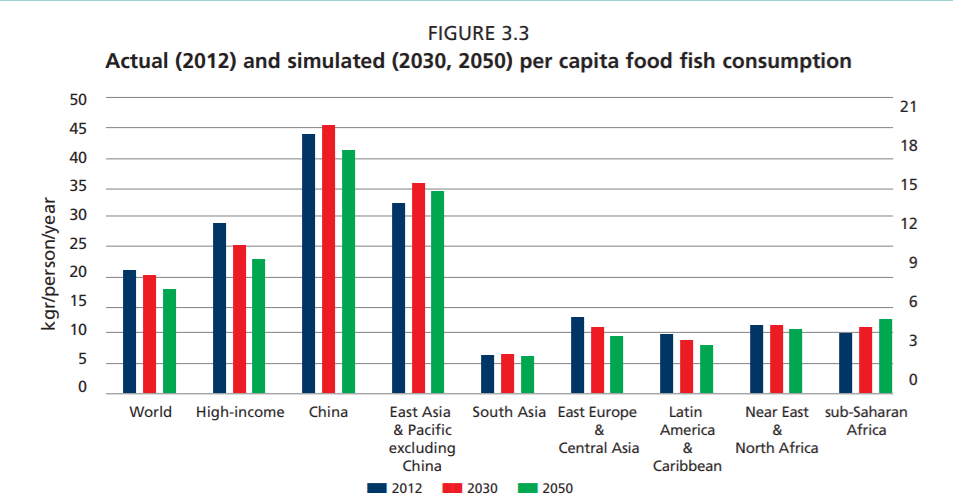 Per capita fish demand is predicted to decrease by 0.6% between 2012 and 2030 for the high-income countries.

As a result, per capita, food fish consumption is expected to drop during this period in all regions between four percent (in East Asia and Pacific excluding China) and 14 percent (in Eastern Europe and Central Asia) with the exception of sub-Saharan Africa.

Countries with most endangered fish species

Fish are among the most endangered species group of animals on the planet. The figure below shows that sea species are threatened in most of the countries in the world. 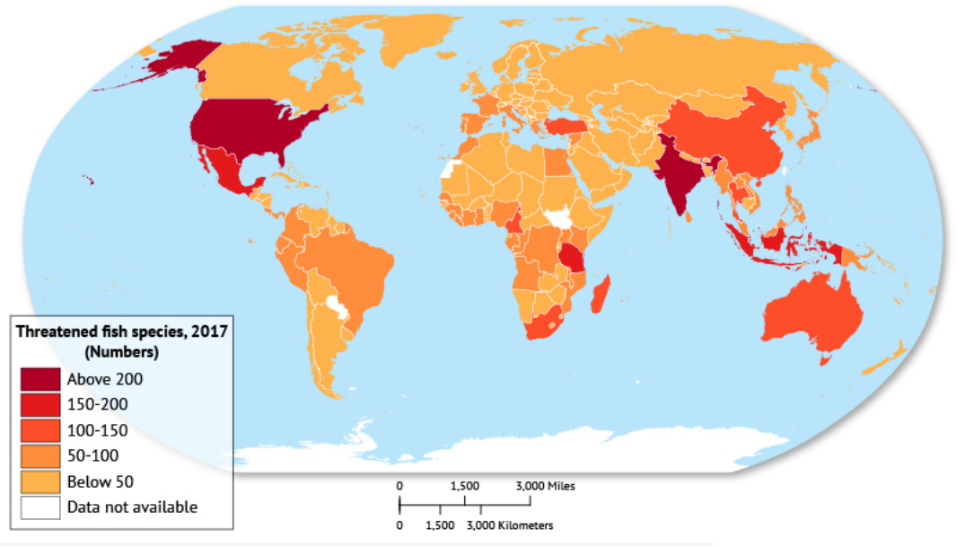 According to WWF, overfishing can be defined as the practice of fishing whether it is commercial or non-commercial in rivers, streams, and oceans at a too high rate where fish stocks become too depleted to recover naturally.

For a sustaining life on our planet, aquatic creature and overall health and safety of marine life is crucial (Rinkesh, 2020).

However, overfishing is causing dreadful consequences that affect the balance of life in the oceans as well as the social and economic well-being of Humans who mostly depend on fish for their way of life (Rinkesh, 2020). Today, 19.2 Kg of fish is consumed per each person every year, around twice as much as 50 years ago (FAO, 2014).

Thus, in 2018 around 6 billion tons of fish and other invertebrates were caught from the seas worldwide which means 30 to 35 % of the marine population are overfished with 60% are fully fished based on the latest available data. (FAO, 2018).

Many seas and oceans around the world are subject to unsustainable fishing practices including 40% of fish stocks in the North-East Atlantic and 87% in the Mediterranean and Black Seas (STECF, 2019).

As a result of prolonged and widespread overfishing, nearly a third of the world’s assessed fisheries are now in deep trouble and makes the fishing industry the main threat to marine wildlife.

However, due to early well-managed fisheries, some northern European fish stocks are getting better and are at their maximum sustainable yields like those in the Norwegian Sea and Barents Sea (Froese et al., 2018).

Environmental variability and long-term climate change has a great influence on the ecosystems and the food production systems (Ray, 2015).

Climate change and overfishing are playing an important role in accelerating the decline of ocean health putting marine ecosystems and the goods and services provided to society at risk.

Fisheries interact with climate change and biodiversity, leading to profound changes in ecosystem structure and function. Actually, Climate change is disrupting the physics, chemistry and ecology of the ocean, with significant consequences on the life it holds. (Rashid & Travis, 2020).

The figure below shows how climate change impacts fisheries and marine ecosystems and life through a number of channels. 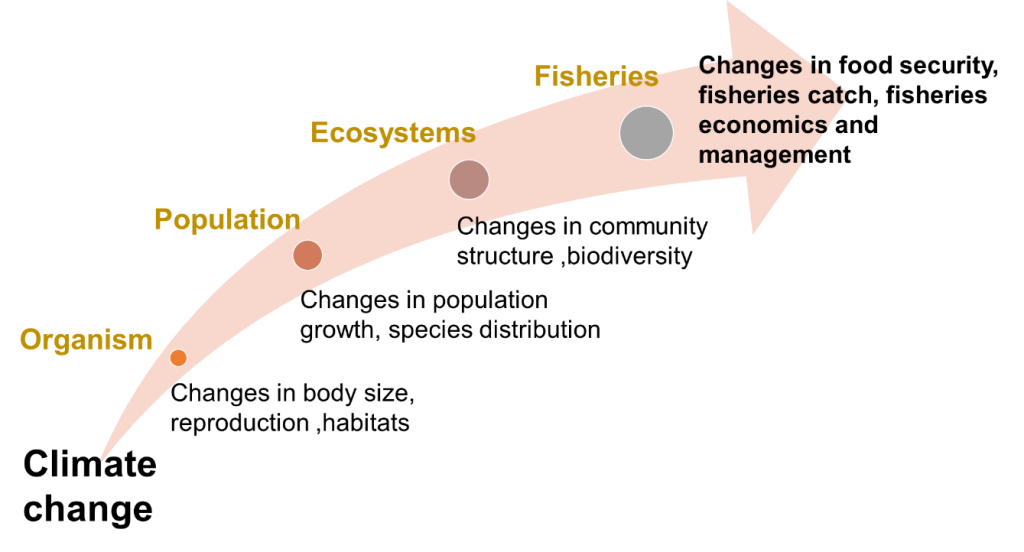 Climate change can directly affect marine life by changing the physiological function and behavior of the aquatic animals (Somero, 2012).

Global warming affects the Temperature of the oceans which in turns affects the biological performance of marine organisms including growth, reproduction, and survival.

Dissolved oxygen plays a crucial role on the global carbon and nitrogen cycles in aquatic systems. So, a change in DO concentration influence greatly the biological and biogeochemical processes.

The onset of rapid climate-related changes in these ecosystems are increasing pressure on fish stocks, with the potential of extinction for some fish species. 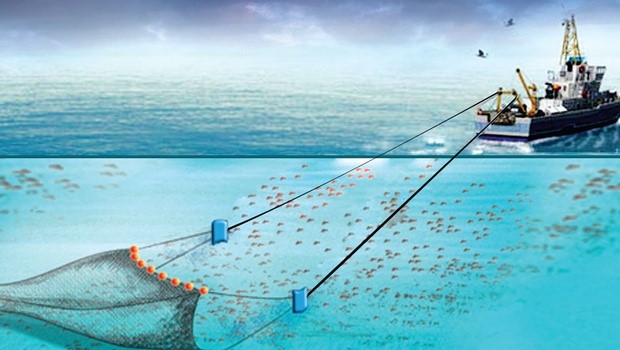 Some of the causes of overfishing include:

The modern equipment and technology that fishing industries use can deploy deep into the oceans and can stay on the seas for weeks and months (Today, 2008).

Unsustainable fishing encompasses the use of nets, fishing methods such as bottom trawling and pelagic driftnets, that catch too many fish to a degree that they are endangered.

It also involves catching other sea animals other than fish in the process. These are called By-catch. In many cases, by-catch is destroyed and thrown back into the sea. They also catch young fishes and prevent them from growing to reproduce.

Illegal fishing activities include poaching, taking more than the allowed amount of catch, and fishing out of season. According to WWF, illegal fishing accounts for about 20 percent of the world’s catch and up to 50 percent in some fisheries.

Besides the effects on human consumption, overfishing can have a number of other effects:

Unsustainable fishing or the use of modern fishing technology is a major threat to ocean ecosystems. Three main issues that current fishing technology can cause: The destruction of the physical environments of marine life, ghost fishing and bycatch.

Additionally, the catching of essential predators such as sharks, tuna, and billfish in long run disrupt the marine ecosystem. This can affect the rest of the ecosystem, with issues such as the increased growth of algae. 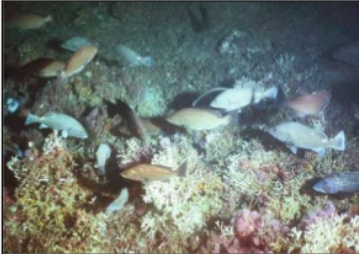 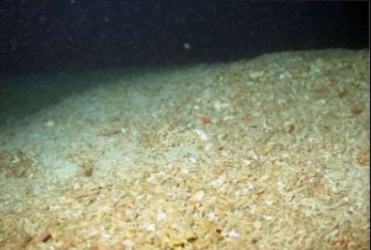 Many people around the world relay on

fishing for their livelihood and nutritional needs. Oceans have supplied us with sufficient seafood for years, but that is no longer the case.

So, when these peoples can’t access food or their financial support, they are likely to have trouble in the future. In addition, with no valuable fish left in the waters to fish, the fishing industry is on the verge of collapse.

Oceans has a rich and diversified marine life with millions of fish species and other marine animals.

Fishing a very particular species may lead to their extinction. Actually, 5 out of the 8 tuna species are at risk of extinction according to the International Union for Conservation of Nature (IUCN). 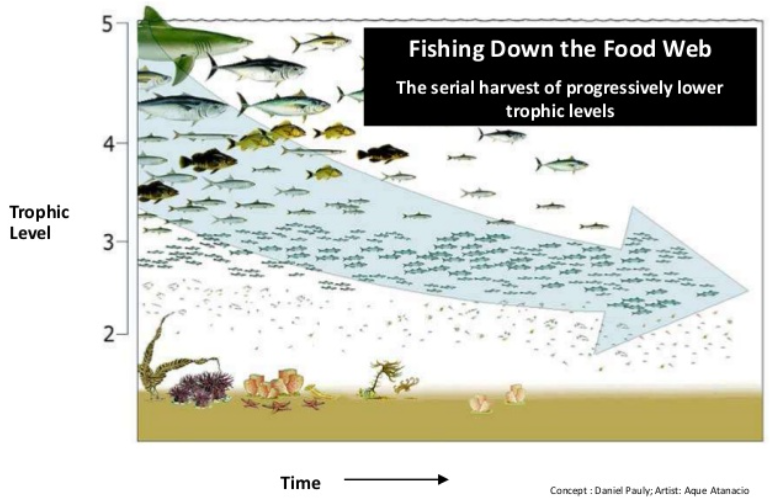 The Mediterranean Sea has high biodiversity that makes it is one of the world’s biodiversity hotspots. It has more than 17,000 marine species (Coll et al., 2010).

The map below shows the biodiversity of The Mediterranean Sea (Coll et al., 2010).

Starting from 1970s, overfishing began in the Mediterranean Sea which is caused by the high percentage of unsustainably harvested fish populations.

As a result of that, 90 percent of its fish populations is exploited in excess and makes the Mediterranean the world’s most overfished sea.

According to the International Union for Conservation of Nature (IUCN) more than 50% of the sharks and rays native to the Mediterranean Sea are at a high risk of extinction, (Dasgupta, 2016). 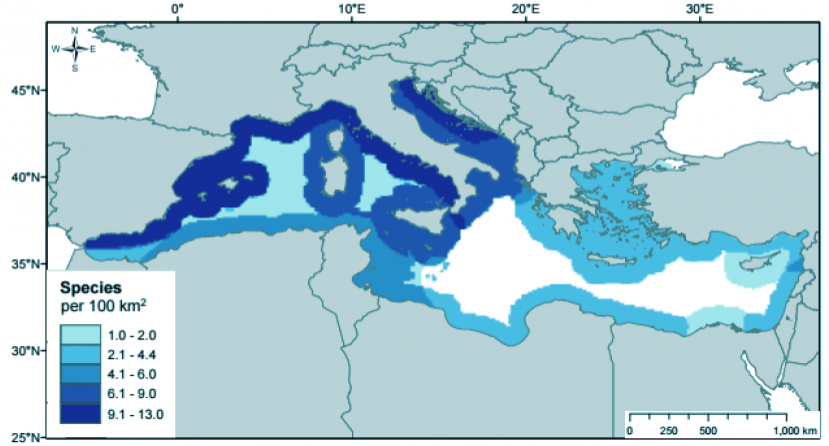 Most local extinctions of sharks and rays have occurred in the North West Mediterranean waters. Photo: IUCN-Med. 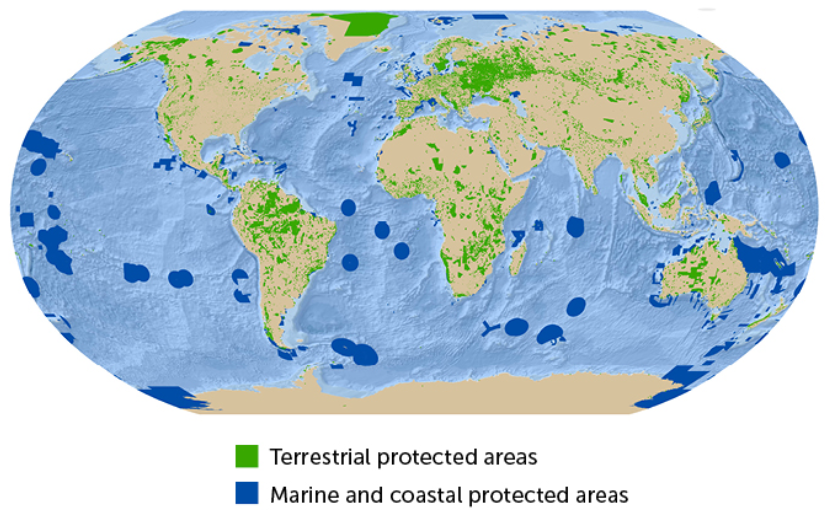 Figure 7: Areas under some form of protection in 2020 (WWW.PROTECTEDPLANET.NET/UNEP-WCMC, 2020)

More no-catch zones must be established to allow fish populations and their ecosystems to recover to ensure fishing for future generations.

To manage fishing, establish catch share is an important way. It gives a specific portion of the year’s overall catch limit to individual fishermen, or a group of fishermen, for their exclusive use. This way, there will be no competition among the fishermen like in the traditional fisheries management.

Catch shares commonly give more security to fishermen, allowing them to catch their portion when they want to. Most of all, catch shares use a total allowable catch for a species depend on numbers that scientists believe allow the fishery to recover.

The illegal fishing practices is done by persons which their only want is to earn high profit. These practices leave chaos to the ocean life.

The unregistered fishing companies and the foreign fishing vessels are in charge for this illegal practice. They do not follow the rule and run their practice undercover. Combating this crime will help the fishery to develop and keep the fish stock in allowable level.

Trawling drags huge nets through the ocean that swipe every marine creature in its pathway, resulting in massive wasteful bycatch. Banning the trawling will save more life and the number of caught fish can always stay under control without any wasted marine life. 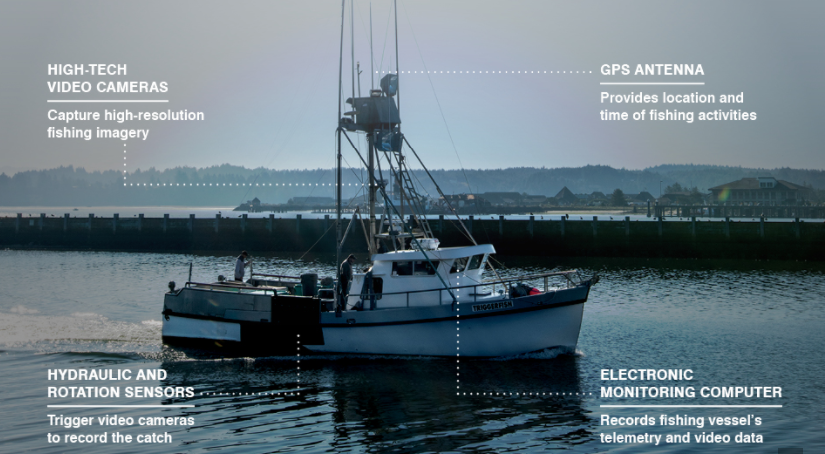 Improving the fishery management by equipping boats with powerful digital tools could add more jobs, more than $80 billion to the global economy and could reverse the biggest threat to our oceans — overfishing (EDF, 2020).

As global citizens become more aware of overfishing and the ecological destruction of the oceans, movements have sprung up to encourage abstinence.

Not eating any seafood—or eating only “sustainable seafood” (Monbiot, 2019).

World bank, W. (2018, June 13). What are the countries with the most threatened species of fish? Retrieved from Maps of World: https://www.mapsofworld.com/answers/world/countries-threatened-species-fish/#

Dasgupta, S. (2016, December 06). Over 50% of sharks and rays in the Mediterranean Sea are at risk of extinction. Retrieved from Mongabay: https://news.mongabay.com/2016/12/over-50-of-sharks-and-rays-in-the-mediterranean-sea-are-at-risk-of-extinction/

EDF (2020). This is the high-tech future of fishing. Retrieved from EDF 5Environmental defence fund): https://www.edf.org/oceans/high-tech-future-fishing

(2014). Food and Agriculture Organization of the United Nations (FAO) . Rome: The State of World Fisheries and Aquaculture .

Rinkesh. (2020). What is overfishing . Retrieved from Conserve energy future: https://www.conserve-energy-future.com/causes-effects-solutions-of-overfishing.php